after seeing jiaqi's blog which link to jean and carol livejournal, i shall have 1 too!!
i prefer livejournal because it has the mood thingys. (so cute!)
hehe not much now 'cos i wanna sleep!!
-lee khim! "Friends only
Add me and introduce yourselves in the comments :)

for silent avid readers. time to create an account.
i'm promoting lj :) "
I've decided to do that too!
btw, lj is fun! my reason stated above.

So I could not resist the temptation to not procrastinate and spent my hard earned money from my part time job to purchase a second-hand PS vita. It wasn't a bad deal since the seller threw in an extra game.
I digress. Anyway I bought my first game Freedom Wars.
( Collapse )

Posted via LiveJournal app for iPhone.

Sure, when pigs fly. >.>
/livesneartheequator.
White air
Is it snowing where you are right now?
Reply 498

Followed by sudden movements of the lizards/cockroaches' shadows. :\
Fear factor
What are you afraid of?
Reply 319

My goodness.
This. is. EPIC!
http://youtu.be/d63jKihoYRg

Why am I looking at youtube and not my pw...
Now back to work orz.

Remember what I said previously about buying my Hetalia OCFs in my own country(Singapore)? I think it turned out to be a fluke. Some of the pictures I saw in the web had those magnets for the characters to stick to in order to 'stand up', whereas mine's just a plastic thing.. 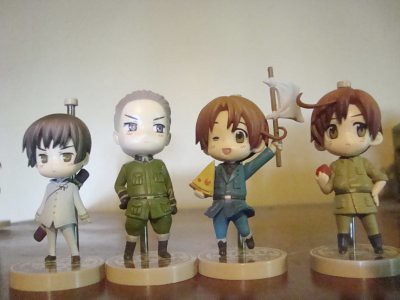 Well, you can tell by looking which is mine right? I have not dared to open the packets yet just in case I can get a refund or something. But, is Italy's hands supposed to be dislocated? or Japan's hair discoloured? (Germany's problem is quite obvious.)
Anyone who wants these, I can sell them for $8 SGD each~

Please comment what you think about it. I wanna hear what are your thoughts~

I just went to the Singapore summer festival for the first time, unlike my bro who went for the third time this year. A fun event, I must say, makes you sweat a lot too!
Event details here: http://www.jas.org.sg/event/summerfes/2011/1107.htm

I've only taken a picture though, but I'm posting this thu my phone so there won't be any pic now.
Collected my prize from STGCC before reaching the changi branch, and I've spent total less than $30 on ヘタリア OCFs and a green tea 北海道 ice cream. I should have tried the games, but $2 per try? No thanks. Danced during the obon, according to my bro, apparently they have been repeating the same dance for the past few years. He even remembered them already.

About those hetalia ocfs, what I've gotten is really strange. I don't want to repeat myself though.
Read here: http://nothingbutjapan.blogspot.com/2011/07/2011.html#comments
What do you think? Having a tomato Germany? XD Scientific research shows that eating too much tomato makes you stupid, according to him, and hence him holding that is certainately strange enough. xD Maybe I should edit to put the pics in when I'm using the com next time.

Anyway, I've decided to forgo my hw/elearning/bath and go sleep earlier. But I'm typing this.. -.-

England
is my
hero.

{CLAIM HERE}
❝Ah, with just a stroke of paint,
a wonderful world can be seen.❞

I want
Austria
to teach me how to make
Sachertorte

I want
Hungary
to teach me how to make
Dobostorta

is making my day purrrfect...

is making my day purrrfect...